Map of the region. Shaded area in upper right is the area Turkish troops aim to control… for now. 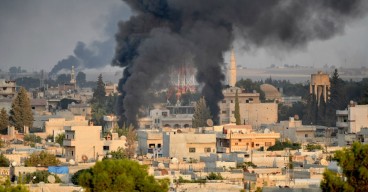 Results of Turkish aerial attack on civilians in NE Syria

The invasion of NE Syria by Turkish president Recep Tayyip Erdoğan is now under way. This is an invasion that is planned to be ten miles into that part of Syria. It will cause untold suffering of the present residents of that region. Already, al Jazeera is reporting that “people fled the (border town of Tel Abyad)… en masse amid the beginning of the Turkish offensive.” Al Jazeera quotes an official of the Syrian Democratic Forces (SDF) as saying that Turkish warplanes are bombing civilian areas and that “there is huge panic among people of the region.”

Meanwhile, the Erdogan regime’s proxy – the “Free Syrian Army” (FSA) – is being mobilized to enter this region. According to Amnesty International, when the FSA entered the North West Syrian town of Afrin, they looted and brutalized the local population. Nothing different can be expected in this new invasion.

Erdogan and his mouth pieces claim the invasion will stop ten miles into Syria. But the Kurdish forces will not accept Turkish control over this area and continual fighting across this new “border” will inevitably draw Turkish forces even deeper. Meanwhile, Turkish capitalists will inevitably look for new means of profiting from – meaning looting – this ten mile zone.

Another purpose of Erdogan’s invasion is to resettle most of the 3.6 million Syrian refugees presently living in Turkey into this “peace zone” as Erdogan is calling it. In other words, this will be a new cleansing of the area’s present residents, setting up new conflicts. (In part, Erdogan is doing this because he has come under increased nationalist pressure inside Turkey from nationalist forces who oppose the presence of these Syrian refugees.)

YPG
The Kurdish YPG will look for new allies, first and foremost the brutal Assad regime.

The invasion places Russian imperialism in a bind. On the one hand, it has achieved closer ties with Erdogan, as for example through its sale of surface-to-air missiles earlier this year. But it is more closely linked with the Assad regime. Therefore, it is calling for “negotiations” – a typical diplomatic ploy when an imperialist power can’t decide whose side to take. “At this stage everyone should avoid any actions that can inhibit the peace process in Syria,” said a Putin representative. By “peace process” he meant the final domination of Syria by one of this century’s most brutal tyrants.

The invasion will increase the tendency towards rights abuses by the PYD (Kurdish) controlled region, as documented by Human Rights Watch as long ago as 2014.

Raqqa, Syria, after the Trump administration got done bombing it. Most of the US “anti-imperialist” left ignored this crime.

The Turkish invasion will also benefit the fascist ISIS. Thousands of their members – male and female – are being held in prison camps in the Kurdish controlled region of NE Syria. Already, there have been reports of horrid conditions that have been greatly worsened by ISIS control over some of these camps – control in which the ISIS prisoners terrorize the rest of those in the camps. As the Kurdish forces (the YPG and the more directly US-allied SDF) mobilize to fight Turkish and FSA invaders, these ISIS members will inevitably be freed and will regroup. In fact, already al Jazeera is reporting that the group has carried out a new attack in Raqqa. That city was sort of the capital of ISIS’s new “caliphate” but they had been crushed by a combination of US bombing and shelling – which totally devastated the entire city – and an SDF invasion. (Most of the left “opponents” of US intervention in Syria completely ignored this war crime.)

US capitalism and Trump
First and foremost, we must not make the mistake of confusing Trump and the US capitalist class as a whole as one and the same. Every single important representative of the US capitalist class, right across the political spectrum, has denounced Trump’s withdrawal. The single most powerful Democrat, Nancy Pelosi, called it a “betrayal” of the US-allied Kurds. Trump’s two major attack dogs in the Senate, Mitch McConnell and Lindsay Graham both denounced it. (In response to Trump’s previous withdrawal announcement, Graham had said “If Obama had done this, we’d be going nuts right now.”)  The view of the diplomatic wing of the representatives of US imperialism was exemplified by this comment of James Jeffrey, whom the NY times identifies as “one of America’s most experienced Middle East hands.” He had said a few months ago “We plan on having a small residual force to remain on (in N.E. Syria) for an indefinite time.” Nor should we forget that the major representative of US imperialism’s fight against ISIS, Brett McGurk, had resigned exactly due to Trump’s previous withdrawal announcement.

As is to be expected, the editorial boards of both the NY Times and the Washington Post denounced the move, but even the editors of the Wall St. Journal denounced it too. (They have become his strongest defenders in most instances.) Their editorial, With Friends Like These”, denounced the withdrawal as a “betrayal” of the only real allies in Syria that the US has – the Kurdish YPG.

One of the most serious strategists for US capitalism, and one who it’s most helpful to read, is Max Boot. He is a longtime former Republican who turned against that party and its president out of genuine patriotism, if one understands the term in its true sense: loyalty to the real interests of the capitalist class, in this case the US capitalist class. Boot explains ‘In August, the inspector generals for the State and Defense departments reported that the Islamic State retains 14,000 to 18,000 fighters in Syria and Iraq and is stepping up insurgent operations in both countries. The drawdown of U.S. forces, the inspectors general wrote, “decreased the amount of resources and support available to . . . Syrian partner forces at a time when they need additional reinforcing for counterinsurgency operations against ISIS.”‘ One clear implication here is the opposition of the US military wing of the government to this withdrawal.

They all point out that no future ally of US capitalism will be able to rely on the US in the future. They also point out how Trump’s withdrawal will not only strengthen ISIS, but also Russian imperialism as well as Iranian sub-imperialism.

“Worse than a crime”
Boot summarized the position of himself and of his class in general by quoting 19th century French statesman, Talleyrand, who had said, “This is worse than a crime. It’s a mistake.”

Boot also put his finger on the underlying problem with Trump: His “lack of loyalty to anyone not named Trump,” as he put it. In other words, Trump has little or no loyalty to the US capitalist class or even any major wing of that class.

Trump
Oaklandsocialist has written many times over about Trump’s money-laundering links to the Russian mafia capitalists. The presence of a president who is directly tied to a rival imperialist capitalist class shows the extreme weakness of the US capitalist class. It also shows that something fundamentally new is developing in the entire method of rule of the US capitalist class over US society. It is unfortunate that so much of the socialist left is unwilling to recognize this transformation. We see that in this case in their identifying Trump’s betrayal of the Kurds as a betrayal by US capitalism (see for example this article), despite the fact that practically the entire capitalist class opposes Trump’s withdrawal, as we have shown here.

Trump’s action is motivated by several sources: First and foremost is his own personal political interests. He knows that his base will support this move. Second, by withdrawing the US troops, Trump is increasing the influence of his semi-sponsor and representative of Russian imperialism, Putin, in the region. Finally, Trump has an instinctive affinity with strongman rulers like Erdogan, with whom Trump was talking right before tweeting out his announcement. It might sound ridiculous that the US president would make decisions based on unthought-out emotional reactions, and it is. But that is exactly part of the problem that most US capitalists have with Trump.

The real betrayal which concerns the US capitalist class is not the betrayal of the Kurds. They’ve shown they’re completely willing to betray that ally – or any other – if it suits them. The real betrayal is that of their interests as they see them. This is exactly the cause of the present impeachment “inquiry”, which was precipitated by Trump’s manipulations in Ukraine. In that case, he was willing to sacrifice US capitalist interests for his own personal political advancement. Now, he’s at it again.

Correction/update: Above, we wrote that Trump carried out this withdrawal in part to shore up his base. Either he miscalculated or we were mistaken in this. Even his evangelical base is opposed to this. For example, it is reported that the influential fundamentalist preacher Pat Robertson said that Trump “is in great danger of losing the mandate from Heaven” due to this move. Possibly it’s more a matter of simple financial self-interest allowing Erdogan to have an oversized influence on him. (Trump has an affinity for dictatorial rulers anyway!) As he had said back in 2015  “I have a little conflict of interest ’cause I have a major, major building in Istanbul,” Trump told Bannon during a Breitbart radio show. “It’s a tremendously successful job. It’s called Trump Towers—two towers, instead of one, not the usual one, it’s two.” That plus the closeness of Erdogan to Trump’s semi-sponsor Putin likely were influential factors. In any case, this doesn’t change our main point, which is that Trump is at odds with almost all wings of the US capitalist class and their strategists on this.