May Day 2019: Mourn for the dead; fight like hell for the living! 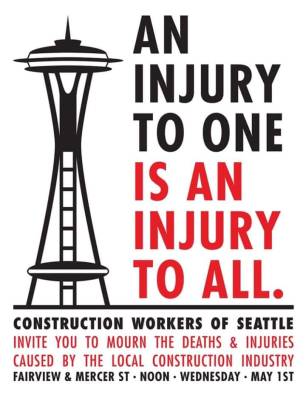 Alan Justad, 71; Sarah Wong, 19; Andrew Yoder, 31; Travis Corbet, 33. These were the four killed when a tower crane collapsed in Seattle last Saturday (April 27). They are just a tiny little symbol of what is happening. There were 4,674 workers killed on the job in 2017 (the latest year for which there are statistics). This is nearly 13 every day, and more than that when one keeps in mind the fact that most workers don’t work on Sunday. It also does not include those workers who are poisoned on the job and die as a result or are injured on the job but die as a result of the injury later off the job.

As for the crane accident in Seattle: While it isn’t certain yet, the evidence so far is that the crane toppled over because the ironworkers pulled some pins (bolts) prematurely. Why? According to the Seattle Times, “The Google project, which began in 2017, was supposed to be finished by now, according to a timeline laid out last year by Vulcan Real Estate, the developer.” Anybody who has ever worked construction knows that the push is always on, but especially when a job is behind schedule. We will probably never know whether brothers Andrew Yoder and Travis Corbet were explicitly told to remove the pins prematurely. But even if they weren’t, it is a certainty that they were feeling the pressure. They didn’t have to be told in so many words.

And what has been the response of the union leadership? 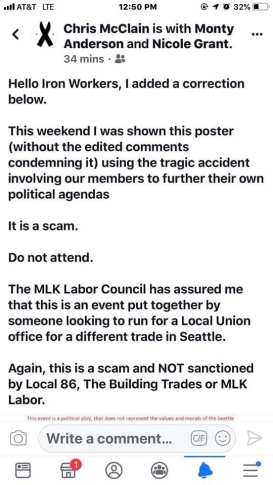 Chris McClain, business manager of Ironworkers Local 86, made his view clear. He posted the comment on the left. Why? Because Northwest Crane Services, the company that was responsible for killing his two members as well as two other people, is a union company. “As long as the dues and trust fund money keeps rolling in, we don’t care how many people they kill” is the idea. This, incidentally, is the same McClain who took the side of one of the world’s richest companies against Seattle’s homeless population.

Construction workers should be under no illusions. This is part and parcel of the way that real wages have been falling throughout the industry. A major method of cutting wages is through weakening the journeyman/apprentice classification. For years, we have had the “pre-apprentice” classification. Why do we need that? A beginning apprentice is not supposed know anything. This writer didn’t. I couldn’t even properly read a tape measure! I was a beginning apprentice, not a “pre” apprentice!

Now, we’re getting reports of a new classification: “intermediate journeyman”. Another form of wage cutting. But you can guarantee that none of these classifications come with reduced dues.

This is not something new. I am sitting here looking at a leaflet we handed out to our fellow carpenters back in 1977. We reported that the April 27, 1977 issue of the “Daily Pacific Builder”, journal of the Associated General Contractors (AGC), had an article talking about the 35% wage differential between unionized and non-union contractors. They admitted that they wouldn’t be able to cut wages outright by that amount, so the plan they devised was to get away from the apprentice/journeyman classification.

In other words, the union leadership is simply taking up what the AGC wants!

Recently, there has been a wave of contract rejections and struggles by workers over the heads of the union leadership. This includes carpenters in NW Washington, Teamsters working for UPS, nurses in New York City, as well as teachers in West Virginia and elsewhere. We have to organize to take back our unions and make them the fighting organizations they were meant to be in the first place. (Those wanting to know more about the unions, and especially the building trades, should read the pamphlet “What Happened to our Unions?“)

One last point: We will never make our unions what they were meant to be until we also take up the fight internationally. We cannot really fight for our brothers and sisters at home and ignore their needs outside our borders. This means taking up the cause of our sisters and brothers forced to leave their homeland in Honduras or wherever due to poverty and violence there. It means supporting our bothers and sisters who are fighting against repression in Sudan.

Today, more than ever before, capital is international. So must our fight be.