Britain: “The Battle is Joined”

We reprint below a report from Roger Silverman in Britain about events there.

After decades of political stagnation, Britain is suddenly plunged into turmoil. It has become, for the moment, the most unstable country in Western Europe. Within a few weeks, it has witnessed the murder of a Labour MP by a Nazi assassin, the shock outcome of the EU referendum, an upsurge of xenophobia and bigotry, the unexpected resignation of a prime minister and the successive downfall of his two most prominent presumed successors… And, most crucial of all, the long-overdue split in the Labour Party. 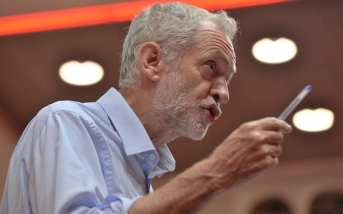 Corbyn
At first sight Corbyn may appear a little less radical than Bernie Sanders in the USA, with Sanders’ talk of “revolution” against the “billionaires’ dictatorship”. But Corbyn, an honest and principled traditional left reformist, stands implacably for resistance to austerity, nuclear disarmament, and renationalisation of the railways, and these are solid commitments. The difference is in the historical context. The election of Corbyn means a reclamation by the working class of the party it created over a hundred years ago from the clutches of conscious agents of the class enemy. It was the result of an unforerseen tidal wave: an anticipation of revolution. The violent class tensions that had been tightly compressed for two decades within the Labour Party, the traditional party of the working class created by the trade unions, could no longer be reconciled. Under the shock of the financial crash and the subsequent years of savage cuts, nothing could prevent it bursting asunder.

Labour MP’s and “New Labour”
These Labour MPs are not just a new generation of the old-style reformists of yesteryear – tainted individuals perhaps, cowardly, treacherous, bribed or intimidated, but with roots firmly implanted in the labour movement. During the 1990s, an openly pro-capitalist grouping assumed the leadership of the Labour Party. One of them, Mandelson, openly boasted: “I am supremely relaxed about people getting filthy rich, so long as they pay their taxes”. They tried to eradicate Labour’s socialist and trade-union traditions and proclaimed a new identity, calling themselves “New Labour”.

New Labour served a very specific historical purpose. It was the product of a conscious conspiracy by the ruling class: to carry onward the Thatcherite counter-revolution wrapped in new packaging, once the Tories had become too discredited to do it themselves under their own banner. It was only after the financial crisis in 2008 that New Labour was deemed to have outlived its usefulness; once having served its purpose in government, it was unceremoniously ditched, and the reins of power firmly grasped by Britain’s traditional masters.

The Blairite MPs have no links or allegiance to the labour movement, let alone any aspirations to a new society. They are plain careerists who at a certain time found it opportune to jump on the New Labour bandwagon. Most of them are relics of that Blairite influx: an alien force of lawyers, lobbyists and “special advisers” hostile to the workers’ interests. One trade union leader rightly called them a “virus”.

Two Classes Cannot Share One Party
Two classes can’t share one party. It was always inevitable that, sooner or later, the working class must either reclaim the Labour Party or replace it. With the mobilisation of the Labour ranks and affiliated trade unions, and a huge influx of new and overwhelmingly younger members, we see a combination of both variants: a replenished and reinvigorated mass workers’ party, already numbering half a million members.

The exact mechanism by which the crisis has erupted is a consequence of the arrogance of the Blairites, who still delude themselves that they enjoy mass support. They had blamed the election of their previous leader, the pathetically ineffectual Ed Miliband, on the trade union block vote, and imagined that by throwing open the franchise to all and sundry, allowing anyone to register as a supporter, they could secure victory for their own preferred candidate. They then compounded this mistake by lending Jeremy Corbyn enough MPs’ nominations to cross the threshold to stand as a candidate, hoping thereby to demonstratively humiliate the left.

Actually it was a questionable exercise of “democracy” to allow the party leadership to be determined by selling cheap votes to all and sundry, irrespective of their commitment to the party. However, such was popular outrage at New Labour’s despicable record of treachery, and anger at the election by default last year of yet another even more right-wing Tory government, that hundreds of thousands of people registered as supporters, exercised their voting rights as affiliated trade unionists, or joined the Party outright. Jeremy Corbyn won a decisive majority in all three sectors, with 60% of the vote and a popular mandate of 250,000 people.

Clean Break
If Corbyn’s victory was not to mean a reclamation by the working class of its traditional party, then it would have been meaningless. What had to follow was a clean break between the mass of trade-union rank-and-file Labour activists and the parasitic rump of New Labour MPs clinging on to their parliamentary seats.

Under the impact of current historical shocks, what was already a simmering crisis has now come to an immediate showdown. Predictably, it was the MPs who precipitated it. By a four-to-one majority, they passed a vote of no confidence in Corbyn’s leadership and are now scrambling around trying to find a candidate to challenge him. Having failed in a brazen plot to keep Corbyn off the ballot paper (a provocation that could only have precipitated an immediate split), in an act of pure spite they disenfranchised over 100,000 Labour members at a stroke by imposing an arbitrary cut-off membership date, and raised the affiliation fee for new supporters from £3 to £25, while giving them a deadline of just two days to register.

It’s not, as they pretend, the risk of defeat in a coming general election that the Blairite MPs are afraid of; what terrifies them is the prospect of victory under a socialist leadership. Jeremy Corbyn was elected leader of the Labour Party with the biggest mandate of any political leader in British history. Hundreds of thousands of people were inspired to join the Labour Party to support him. Since his election, Labour has begun to recover from years of decline under Blair, Brown and Milliband.

Who are the Labour right to complain of declining support? It is eleven years since they last won an election. Since the 1997 election, under Blair and Brown, Labour lost four million votes; not to mention losing every single seat but one in Scotland to the Scottish Nationalists. In contrast, under Corbyn’s leadership, Labour gained the biggest share of the vote in local council elections around the country; won all four successive by-elections with increased shares of the vote; and won all four mayoral elections, including London, where the Labour candidate won the highest ever vote for any individual candidate: 1.1 million votes.

Split Long Overdue
The imminent split in the Labour Party is long overdue. The mass of trade-union rank-and-file Labour activists and the parasitic cabal of crypto-Tory MPs who have made their nests in the parliamentary party could not preserve for long their uneasy cohabitation. For them, this is not a political debate. They are fighting for their careers, their livelihoods, their privileged place in society. This is a fight to the finish.

Hundreds of thousands of Labour activists are ready and waiting to defeat this coup by a clique of embittered careerists, and restore to Labour its socialist traditions. Everywhere throughout Britain, every day, local branches of Momentum, the grassroots mass movement that has sprung up in support of Corbyn, are meeting, planning, recruiting, discussing, campaigning, enraged at the MPs’ dirty tricks and determined at all costs to win: working-class women, ethnic minorities, youth, disabled people, older men… a real parliament of the people!