On this day, April 19, 1943, there was one of the most heroic uprisings in human history – the Warsaw Ghetto Uprising. It deserves to be remembered every year, not only to inspire our hearts but also for the lessons we should carry in our minds. The best history of this uprising is “The Ghetto Fights,” by one of the very few surviving participants, Marek Edelman.

Edelman was a member of the youth group of the Bund, which was the Jewish socialist party. The Zionists were bitterly hostile to the Bund, it should be noted.

In the years leading up to 1943, the Nazis had increasingly attacked the Jews. During the Easter holidays of 1940, for example, they paid Polish thugs to carry out “pogroms” – race riots against the Jews. The Jewish socialist party – the Bund – alone fought back. “All the other (Jewish) groups opposed our action,” Edelman writes. In other words, the Zionists were passive; they opposed fighting back.

Increasingly, the Jews were herded into the ghetto, where they were isolated and starved. 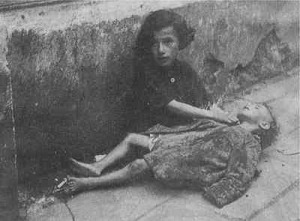 Starvation in the Warsaw Ghetto

it got out into the streets, came into sight in the shape of ridiculously swollen, log-shaped bodies with diseased feet, covered with open wounds, wrapped in dirty rags. It spoke through the mouths of the beggars, the aged, the young and the children in the streets and courtyards.”

From throughout Poland, Jews were sent into the Warsaw Ghetto. Hundreds. Thousands. Too numerous for the Nazis to control by themselves. So they recruited what Edelman calls “the best known citizens” into a Jewish Council (“Judenrat”) to govern the Ghetto on the Nazis behalf.

The Ghetto was increasingly isolated from the outside world. Those caught sneaking outside were arrested. In early 1941, the repression increased and the first of those arrested – seventeen in all – were executed. This included four children. “Cries from other jail cells could also be heard, the voices of future victims awaiting trial for the same offense, a total of 700 people…. The Ghetto could clearly feel the breath of death.”

The persecution increased, faster and faster. “Now the events began moving at a breathtaking pace. The Ghetto streets became a bloody slaughterhouse…. One of the more notorious sadists, a gendarme of the Schutzpolizei by the name of Frankenstein, had on his conscience over 300 murdered people, more than half of whom were children.”

Meanwhile, reports began filtering into the Ghetto of mass extermination of Jews. Desperate. Abandoned by the “leading citizens”. Cut off from the outside world. Starving and weakened, the great majority in the Ghetto refused to face up to this reality. But not the courageous few of the Bund youth.

Then in April of 1942, the Nazis ratcheted up their murder machine another notch. In one fell swoop, they seized all Jewish social workers and executed them in the street. The Bund youth explained that this was a step towards mass extermination, but again the majority refused to believe it. Random executions increased the terror still further: “Three children sit, one behind the other, in front of the Bersons and Baumans hospital. A gendarme, passing by, shoots all three with a single round. A pregnant woman trips and falls while crossing the street. A German, present during the accident, does not allow her to rise and shoots her there and then.”

By July, the Nazis had established a quota of 6,000 Warsaw Ghetto Jews to be deported to the death camps daily. The Bund youth had gotten the reports of trainloads of Jews being taken to Treblinka and returning empty and no food was taken into the camp. There was only one explanation, but still the desperate majority refused to believe it.

Under these conditions, the Bund youth started making plans for armed resistance. The only other group that supported them was the left Zionist youth. (The mainstream Zionists opposed resistance.) This united front carried out its first attacks in November, when they attacked the Jewish police, obtaining a few arms. In December of 1942 they received their first arms from outside — all of 12 pistols.

January of 1943 saw the first acts of armed resistance to deportation. Although four out of five of those who participated were killed, this resistance sent a shock wave throughout the Ghetto. Where words failed, action in the right place and time succeeded. Edelman explains: “For the first time, German plans were frustrated. For the first time the halo of omnipotence and invincibility was torn from the Germans’ heads. For the first time the Jew in the street realized that it was possible to do something against the Germans’ will and power…. In the meantime legends about ‘hundreds’ of dead Germans and the ‘tremendous’ power of the ZOB started to circulating throughout Warsaw. The entire Polish underground was full of praise for us. At the end of January we received 50 larger pistols and 55 hand grenades from the Home Army command.”

The Nazis responded with renewed propaganda, this time in the person of Jewish capitalist J.C. Toebbens, who tried to put out the word of the wonderful working conditions in his factories to which the Jewish workers were being deported. He was joined by a group of jewish foreman in this claim. Their propaganda sheet was destroyed by the Bund youth before it could hit the streets. By March of 1943 the mood started to shift;  reality could no longer be denied but also the resistance was having an effect. So the Nazis decided to liquidate the entire Ghetto in one fell swoop. 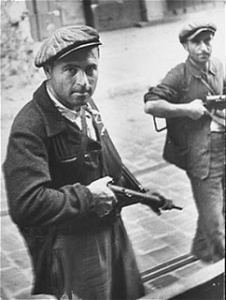 Jewish fighters in the Warsaw Ghetto.

In the early morning hours of April 19, their troops surrounded the entire ghetto, preparing to advance and kill on the spot or deport all the Jews. The resistance sounded the alarm and their fighters were at their battle stations.

“In closed formations, stepping haughtily and loudly, (the German troops) marched into the seemingly dead streets of the Central Ghetto. Their triumph appeared to be complete….

“But no, they did not scare us and we were not taken by surprise. We were only awaiting an opportune moment. Such a moment presently arrived…. Strange projectiles began exploding everywhere (the hand grenades of our own make), the lone machine pistol sent shots through the air now and then (ammunition had to be conserved carefully), rifles started firing a bit further away. Such was the beginning.

“The Germans attempted a retreat, but their path was cut. German dead soon littered the street…. The ‘glorious’ SS… called tanks into action under the cover of which the remaining men of two companies were to commence a ‘victorious’ retreat…. The first (tank) was burned out by one of our incendiary bottles, the rest did not approach our positions. The fate of the Germans caught in the Mila Street-Zamenhofa Street trap was settled. Not a single German left this area alive.”

For days, for weeks, the battle raged. On the one side the most modern and powerful army in the world. On the other a ragged band of youth armed with home-made grenades and a few pistols and rifles. Unable to spare the full force of its army and air force (it was fighting another war, after all), the Nazis resorted to a low-cost warfare method: Fire. They simply decided to burn the Warsaw Ghetto down. Throughout April the battles raged. 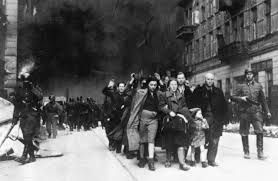 May Day in the Warsaw Ghetto

On May Day the Command decided to carry out a ‘holiday’ action. Several battle groups were sent out to “‘hunt down’ the greatest number of Germans possible. In the evening, a May Day roll-call was held. The partisans were briefly addressed by a few people and the ‘Internationale’ was sung. The entire world, we knew, was celebrating May Day on that day… but never yet had the ‘Internationale’ been sung in conditions so different, so tragic…”

Yet the fighters held out. Throughout May and into June they fought on. Ultimately, they could not win, and they knew that from the start.

It would have been different had the Allied Powers come to their aid and air-lifted arms,ammunition, food and water to these fighters. That low-cost action would have truly created a decisive crisis for the Nazi regime. But true to their nature, the capitalist powers preferred to fight on for years longer than to support a real revolt. So it was that, starved and without even water, running out of ammunition, in June the fighters decided to end the battle. Some committed suicide rather than be taken by the Nazis. Others – a very few – managed to escape through the sewer system. Fortunately, Marek Edelman was one of those few, and his short book remains as a testimony to one of the greatest acts of rebellion of that period.
For a more in-depth review of this history and the general history of Zionism, see this pamphlet.

Update: We just came across this article on the more recent life of Marek Edelman. After the war, Edelman continued to live in Poland, and towards the end of his life he reportedly condemned Israel.