Brexit, Theresa May, Jeremy Corbyn and the dog who was silent in the night

The Brexit endgame is playing out. Theresa May’s position as prime minister is under threat from the Brexiteers, who are alarmed at the prospect of a capitulation to the EU. There is talk of a mutiny by some Blairite Labour MPs to save her from a Tory revolt. But how many of these are willing to commit harakiri on her behalf and face certain deselection?

As I have commented earlier, sometimes silence can be as eloquent as the most strident noise. That’s what Sherlock Holmes had in mind when he commented on “the strange behaviour of the dog in the night” [reference to the dog who didn’t bark].

Jeremy Corbyn
The capitalist press has stopped attacking him.

Media silence
Just after the Labour Party conference, a strange silence suddenly afflicted the media. This followed three years of rabid howling against Labour, more ferocious than at any time since the fake Zinoviev letter scare in 1923. It was not as if the conference hadn’t offered the media ample excuses for further displays of mock hysterical outrage: the waving of Palestinian flags, the obvious ambiguity and equivocation about Brexit, the threat to the guarantee of lifelong job security for Blairite MPs…. Suddenly the unremitting chorus of raucous smearing and jeering was switched off; Corbyn was no longer branded a pacifist and somehow simultaneously a terrorist sympathiser, a Czech spy and also an anti-Semite. The dogs had fallen mysteriously silent. 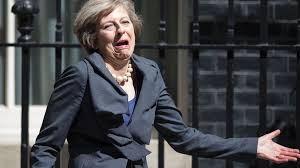 British PM Theresa May.
She’s caught in a bind.

“No deal” Brexit?
The fear that Britain is rushing headlong towards a dangerous “no-deal” Brexit is causing panic within the ruling class. It is putting at risk the last lingering relic of any global power or prestige. Desperate times require desperate measures. One extreme option that must be under consideration as a last resort is a temporary replacement of the demented Tory lunatics by a Labour government. Let responsibility for the negotiations rest in the safe hands of Sir Keir Starmer, they must be thinking; let Labour bear the brunt of all the odium and xenophobic hysteria from the resurgent ultra-right for “betraying the will of the people”, etc.

And then? Why, then, when the time comes, they still have the power to deploy all the classic dirty tricks to destabilise the Labour government – a run on sterling, an investment strike, terrorist outrages from all quarters, racism, rioting, assassinations, even a military mutiny…  Now that the threat of a purge of the Parliamentary Labour Party has been averted – something which would have been inevitable if the will of the rank and file for open selection of Labour candidates had prevailed – the ruling class are now guaranteed the continued presence of a fifth column planted firmly within the Parliamentary Labour Party, ever ready at the given signal to pull the plug on Corbyn.

This is certainly not their preferred option. The ruling class has every reason to be nervous at the prospect of the massive expectations that would be aroused by the election of a left Labour government under Corbyn. If they can succeed in luring enough of the Blairites to defect in advance of a general election, to tempt enough of them to defy the Labour whip, prop up May against a hostile Tory rebellion and allow a partial capitulation to the EU, then they will eagerly opt for that outcome; it would be a far safer solution. But it is doubtful whether they could persuade enough of them. There will be overwhelming pressure on these potential renegades from the Labour ranks to avoid the odium of betrayal and the certainty of reselection and political oblivion.

A brief and turbulent Labour government has to be one option that they are keeping in reserve, to prick the bubble of the Corbyn surge. There can be no other explanation for the strange reticence of the media in suddenly switching off the previous slander campaign.

The dog has gone silent. There is only one explanation.