Trump isn’t looking so good, but Biden, Warren and Sanders are. Who’s looking best to most Americans? Barack Obama! That’s the results of a recent Foxnews opinion poll conducted in mid-August (8/11-13), and it says something about the general mood in the US today.

Or put it another way: Only 27%  of voters strongly approve of Trump while 48% strongly disapprove.

This has several implications for next year’s elections. First is that turnout for the anti-Trump voters is likely to be higher. Second is this: The 27% who strongly approve of Trump (vs. the 48% who disapprove of him strongly) are the die-hard Trumpsters. They will support him even if, as he said, he were to shoot somebody in the middle if Fifth Avenue… or to be more realistic, if the economy crashes. Many of that remaining 15% of US voters who only “somewhat” approve will melt away like Greenland’s glaciers when the economy nose dives.

Another question is also revealing: Only 16% “approve” of Trump’s tweets, whereas 51% disapprove and 31% wish he’d “be more cautious”.

Similar results are seen in the response to how satisfied people are with the direction of the country. 40% overall are satisfied while 59% are dissatisfied, and whereas only 14% are “very satisfied”, 35% responded “not at all” satisfied. (vs. “not very).

The news is not good for Trump on another score: Whereas 30% of people were “extremely” interested in the then-upcoming election a four years ago (July-Aug, 2015), now 57% say they are “extremely” interested. And 48% say they are more likely to vote in the Democratic primary in their state whereas 36% say they are likely to vote in the Republican primary. It is reasonable to predict that those Democratic primary voters will tend to vote Democrat in the full election. In other words, Democratic turnout is likely to be higher than Republican turnout.

Democratic candidates
Support for Biden remains pretty constant and is now at 31%. Of the two “left” candidates, many Sanders supporters seem to have drifted to Warren. Whereas Sanders support has plunged from 23% in March, Warren’s has risen from a mere 4% to 20%. She has gained other support, possibly at the expense of Beto O’Rourke, who had generated some excitement with his animation and table-top speeches but has recently been exposed as being little but an empty shell. His support has collapsed from 8% down to 2%.

The poll also shows the influence of the capitalist media by answers to the matchup between various Democrats and Trump. By 50% to 38%, voters favor Biden. But the very next candidate is Bernie Sanders (virtually the same at 48% to 39%). The two are at the opposite ends of the Democratic Party spectrum, yet they are in a virtual tie vs. Trump. The only explanation for this is name recognition.

Bernie Sanders
Things do not look too good for Bernie Sanders, whose favorable rating went from 60% four years ago to 50% today. What happened was that in 2016 Sanders went largely uncriticized, both by Trump and by Hillary Clinton. Now he’s starting to come under some fire. 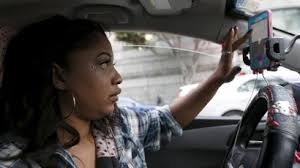 An Uber driver. These workers are working long hours and barely getting by.

General mood
The poll reveals that the main mood is for an end to all the insanity, the lying, the racism and chaos that Trump is generating. Fully 60% say that their main motivation in supporting a Democratic candidate is “restore the country and get American politics back to normalcy”. And topping the list of those who draw a “favorable” impression is… Barack Obama at 60%. Note, also, that his “unfavorable” rating went from 44% four years ago down to 37% today. In other words, Obama doesn’t look so bad anymore, compared to what we have today. This also shows the desire to return to the good old days when the president of the United States could at least not tell blatant lies every time he opened his mouth, didn’t openly stir up bigotry and division, and didn’t claim that he was “the chosen one” or throw a temper tantrum when Denmark refused to sell Greenland to him. 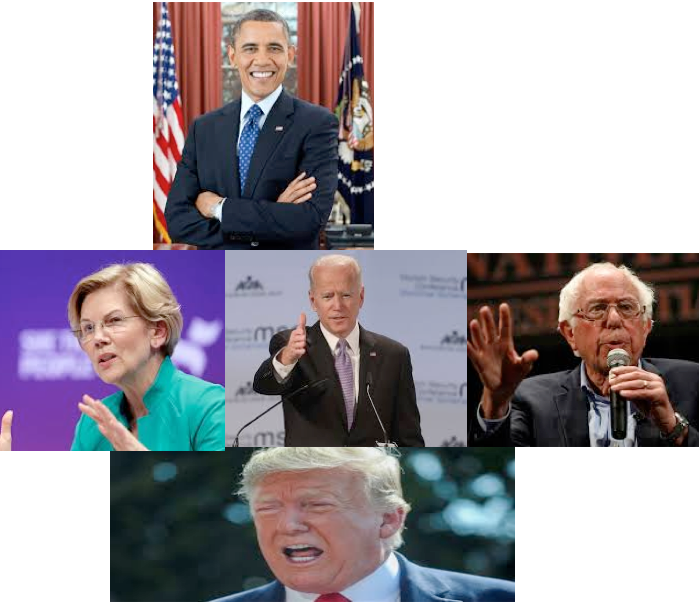 Trump, the top three Democratic candidates and at the top of the heap: Barack Obama.

Economy
People were asked whether they felt their financial situation was getting ahead, holding steady or falling behind. Despite the longest period without a recession in US history, half the population feels they are treading water, AKA “holding steady”. (Note how it is phrased!) Another 26% felt they are still falling behind. As the economy starts to show its cracks, this has huge implications for when we hit a downturn.

Another question revealed that only 40% were satisfied with the direction the country is headed in vs. 59% who were dissatisfied. Even among white men the view was even. Among black Americans, 78% were dissatisfied.

Demographics
The only demographic group among whom Trump has majority approval is among white men (54% to 46%). White women tend to disapprove (46% to 52%) and among black people his approval rating is at record lows (10% to 86% disapproval).

His strongest approval is predictably among white evangelicals. But even there, 30% disapprove of him (vs. 68% approval). One would have thought his approval ratings would be as high as is the disapproval ratings among black Americans.

The disapproval rating among black Americans should be noted for this reason: Yes, Trump has made some anti-black racist comments, but his main attacks have been on Latino immigrants. And there is some tension between black and immigrant/Latino workers. But it seems that the great majority of black Americans see exactly where Trump is headed. The poll did not record a breakdown of Latino voters. Other polls showed between 56% to 73% do not support him. (The 56% can be misleading since it was taken in Florida, where there are many very conservative Cuban immigrants.)

As for age differences, the poll only differentiates between those under and over 45. Of those under 45, Trump’s approval ratings are even worse – 38% approval vs. 60% disapproval. It’s a safe bet that those even younger will disapprove at an even higher rate.

Class differences
There are no polls I know of that are taken that distinguish by class, meaning wage earners. “Income” doesn’t really come close for several reasons: First, it blurs the vast income differences between white and black people. Second, many workers – such as unionized skilled trades workers – earn as much as or more than many small business people. The closest we have is the distinction between those with or without a college degree. There are many, many workers with college degrees, but it is safe to think that the great majority of those without a college degree are in the working class.

Top, Anders Breivik, murder of dozens of young leftists in Denmark; bottom, Dylann Roof, murderer of black church goers in South Carolina. Such events could actually increase in the event of an economic downturn.

More
There are a lot more issues covered in this poll, especially around the issues related to terrorist and racist attacks, guns and gun control. Anybody who is interested in getting a sense of the views in these and similar issues is urged to look at the poll itself.

Conclusion
A previous Oaklandsocialist article had already pointed out the weakness in support for Trump. These more recent results tend to confirm that. We have also pointed out that there is a very real danger that he could try to remain in office by extra-Consititutional means, including mass voter repression. The results of this poll tend to show that the layer of Trump absolute fanatics, while significant and dangerous, is still relatively small. This doesn’t at all mean that he won’t try and even might succeed in doing so, but it makes it a little more difficult. In the event of an economic downturn, though, the Trump fanatics will likely become even more fanatical, not less. This could tend to mean two things: The base of support for extra-Constitutional means of staying in office is pretty small. However, especially if there is an economic downturn this base could become even more dangerous as far as racist terrorist assaults as well as assaults on the left.

Trump, the top three Democratic candidates and at the top of the heap: Barack Obama.