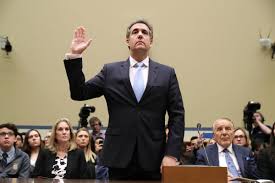 Michael Cohen preparing to testify before the House of Representatives

The Wall St. Journal editors nailed it: Following Michael Cohen’s testimony before congress, they concluded “the impeachment machinery is now up and running. Democrats may find it’s not easy to stop, though they’ll need witnesses who are more credible than Michael Cohen.”

Yes, indeed, the train is rolling down the “impeachment” track because of Trump’s “sleazier” (WSJ editor’s term) connections; and yes, indeed, the Democrats would like to put a stop to that train (“why” comes later); and yes, indeed, not only are more credible witnesses needed, but they are there hiding in plain sight… the main one sitting out on Long Island. Nor will it be easy to keep them/him under wraps forever. 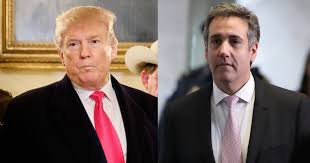 Trump & Cohen. The Republicans are all hot an bothered about Cohen’s previous lies. And Trump’s lies? Not so much.

Cohen’s Background
Let’s start with Michael Cohen’s background. (Note: most of this is drawn from Craig Unger’s book “House of Trump House of Putin”, which is reviewed here.) Cohen comes from a Russian Mafia-connected background. His uncle, Dr. Morton Levine, owned the El Caribe Country Club (actually a restaurant and banquet hall) in Brooklyn. This was where Evsi Agron, known as the first Russian mafia boss, held court. The young Michael was one of several other family members who were co-owners.

Unger explains what sort of lawyer Cohen became: “After law school, Cohen worked with a series of law firms that defended clients accused of participation in various medical malpractice scams, phony auto accident cons and the like that were similar to Russian Mafia swindles in the eighties and nineties…. He subsequently drew up incorporation papers for a number of dubious medical practices and medical billing companies, one of which had filed nearly three hundred lawsuits. In one of the clinics Cohen incorporated, the principal doctor pled guilty to writing phony prescriptions that allowed clients to get 100,000 pills they ordinarily would not have been able to obtain.”

Keeping it in the family
Given their illegal nature, these mafiosa tend to keep it in the family as a means of trying to ensure that nobody will snitch on them. In Cohen’s case, he married the daughter of Fima Shusterman, one of the taxi cab scammers in New York, while Cohen’s brother Bryan was indirectly tied to the “boss of bosses” of the Russian mafia, Semion Mogilovich.

Through his father in law, Cohen got involved in the taxi business, and according to Bhairavi Desai of the Taxi Workers Alliance (a semi-union for taxi drivers in New York), Cohen and his associates “have simultaneously worked to inflate the value of their medallions and rip off their drivers.”

Cohen connects with Trump
In 2006, a group of condo owners gained control over the condo board of Trump Tower in Manhattan who went after Trump for alleged financial improprieties. Trump turned to a sympathetic condo owner for support: None other than Michael Cohen, who had bought up $17.3 million in condo apartments in Trump Tower. That, evidently, was the first known connection between the two. However, it does seem a strange coincidence that the Russian mob-connected Cohen would be buying up units in the equally connected Trump’s real estate.

Cohen worked this connection into becoming executive vice president of Trump Company, where he became “Roy Cohn, 2.0”. (Roy Cohn was the very essence of a shady lawyer, who got a start in his career by working for the infamous McCarthy Committee.) As Cohen told ABC News in 2011, “If you do something wrong (to Mr. Trump), I’m going to come at you, grab you by the neck and I’m not going to let you go till I’m finished.” To compliment that mafia/tough guy image, he took on the Twitter hashtag #secretaryofloyalty.

Felix Sater
Aside from his labeling Trump a liar, a con-man and a racist – none of which qualities have disqualified any Republican or Democrat from getting elected – most of Cohen’s testimony was hardly anything new. His testimony about Trump’s interest in building in Moscow has been known for some time, for example. But it was exactly that subject on which the Democrats will now have to start to zero in. The fact that that poses the danger to the whole house of cards was revealed for a split second. Cohen mentioned the role of Felix Sater, who acted as a go-between between Trump and Putin in that deal.

And what happened? When he brought up Sater under the questioning of Congresswoman Jackie Speier (D, CA), Speier immediately transitioned to such inconsequential issues as whether or not Trump has a “love child”. Why? It’s not that Speier doesn’t know about the issue. She had been sent a major document outlining Trump’s money laundering/Russian mafia history. And she, herself, authored an article in the SF Chronicle that touched on it, although it avoided the central question.

Donald Trump with Bayrock partners Tefvik Arif (center) and Felix Sater at the Soho launch party in 2007. Sater is a convicted financial swindler.
Trump now claims he barely knew Sater and wouldn’t even recognize him in a room. According to Unger, Sater played a key role as the nexus between the Russian Mafia, Putin and Trump.

Who is Sater and why are they afraid of discussing his role?
As Oaklandsocialist has repeatedly documented, Trump made his millions laundering money for the Russian mafia. See this article, for example.) The central nexus between Trump and the Russian mafia was exactly Felix Sater; on his business card, he advertised himself as a “senior advisor” to Trump. Despite this and despite the fact that they have posed for photographers together, Trump denies remembering him. He is so touchy on the subject that, according to Unger, one time when questioned about that connection on BBC’s “Panorama”, Trump went off. “Maybe you’re thick,” he snapped. Then he said “And by the way, I hate to do this but I do have that big group of people waiting, so I have to leave.” With that, he got up and walked off the set.

Money laundering rampant
That is the real big fish to be fried. So why are they all afraid of him? Why are they afraid of delving into the issue of Trump’s money laundering past? After all, that is the root of the issue as far as his links with the Russian mafia. According to Unger, some $300 billion per year is laundered through real estate development and sales. Unger says most of it is from Russia, but there is plenty of money coming in from the drug cartels. For example, there was the 2018 arrest of Luis Eduardo Rodriguez for having laundered $250 million in such money through the Las Vegas real estate market. According to the Washington Examiner “Thirty percent of the cash purchases of high-end real estate by shell companies in six major cities involved a suspicious buyer, according to an investigation conducted by the Financial Crimes Enforcement Network… In other words, money laundering plays a significant role in shaping U.S. cities.” Most of these cities, especially in the North, are administered by Democrats, and it is exactly the real estate industry that tends to be the major donor to these mayors and other city politicians.

The Democrats have a tiger by the tail. They cannot let go of the issue of Trump and his Russian mafia connections. But as the mention of the key player, Felix Sater, shows, it will be extremely difficult to delve into this issue without opening up the money laundering issue. That is the meaning of the WSJ editors’ comment that it may not be so easy to stop “the impeachment train”.

Meanwhile, Sater rests in his home in Long Island, waiting to be called to testify and/or be interviewed by the Mueller “investigation”… or not. If I were him, I’d be very worried about meeting an early end.

Sater, Cohen and Trump
That is the real story