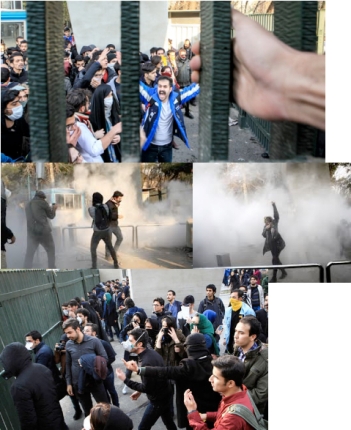 Ongoing protests in Iran
Is this a turning point?

Are the protests in Iran a turning point in the global class struggle?

They started on Thursday in Iran’s second largest city, Masshad around the issues of high prices and unemployment. The very next day they had spread throughout the country, including to Tehran. There is actually some suspicion that the “hard liner” supporters of Ali Khameini were behind these original protests in order to embarrass President Rouhani over the deal he made with Obama. If so the whole thing certainly backfired, since within 24 hours the issue had moved to include protests against the clericals and against the Revolutionary Guard. There were also several instances of crowds trying to invade government buildings, possibly to get documents showing government corruption.

Yurt coal minders protesting Rouhani.
They shouted him down, blocked his car and stomped on the roof and hood.

This movement did not spring up out of nowhere. In May of last year, there was an explosion in a coal mine in Yurt, Iran, which killed some 40 miners. Rouhani visited the mine and was shouted down by the miners, who pounded on his car and jumped on the hood and roof and drove him off. The Alliance of Mid East Socialists reported at the time that workers were saying things like: “Mr. President, none of you knows what it means to be a mineworker. You only remember us now that we have lost 40 miners, 170 children have lost their fathers and 40 women are widowed. Why don’t we have safe working conditions?”   Another mineworker said: “I swear to the Holy Koran that we don’t have bread to eat. I am in pain. . . Do you even know what a mineworker is? We work but we don’t have any insurance.”

In September and October of last year there were strikes of sugar cane workers, factory workers

and others. These strikes revolved around privatization of government-owned companies and the layoffs and even non-payment of wages that resulted.

Echo of Arab Spring
These protests, then, seem to be taking the path that the Arab Spring did, especially in Egypt, where there was a series of strikes against privatization for several years prior to the general uprising of 2011. And that general uprising throughout the Arab world helped create a global mood of revolt that included the Occupy movement in the United States. 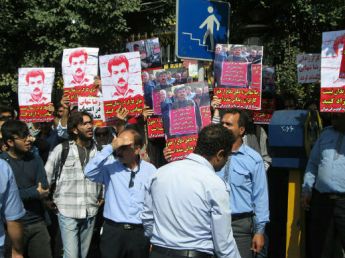 Bus drivers in Tehran demanding the release of their leader Reza Shehabi.
See this article for more information.Occupy movement in the United States.

Likewise, the defeat of the Arab Spring set off a wave of reaction. It gave a tremendous boost to Islamic fundamentalism, including terrorist attacks both within the Muslim world and outside. This combined with the collapse of the Occupy movement and the general rise of nationalism globally to increase the chauvinist and racist reaction here in the United States. It was largely on that basis that Trump was elected.

So, now the question is whether this renewed movement in Iran will set off a new wave of working class struggle. Will it possibly encourage a similar movement in Saudi Arabia, for example, which is already experiencing a shake-up at the top? If so, it could really undermine the bitter sectarian war between the Shia and the Sunni. What affect will it have on the war in Yemen and in Syria too? 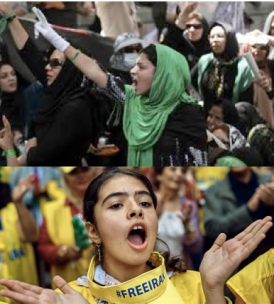 Women join the protest.
Inevitably, the issue of women’s rights will be raised if the protests continue.

Also, there are reports that the youth are also taking up issues of social and sexual freedom under this puritanical regime. Inevitably this will also involve the issue of women’s rights.

Trump
Trump has tweeted support for the protests in Iran, but he’d better look out. Just like he painted all immigrants and all black people with one brush (as criminals), so he’s painted all Muslims and, especially, all Iranians as terrorists. But if Iranian workers are seen as fighting for jobs and a better living standard, that stereotype won’t fly with millions of US workers any longer. As one union carpenter had said to this writer shortly after the Soviet Union collapsed: “What will they use to scare us now that Communism is gone?”

Nothing is guaranteed. There are hints of nationalism in the protests. Probably US imperialism will try to find a way to influence the events. But we should remember the myth of the Greek goddess Athena, who sprung fully formed from the head of Zeus. Just as that myth was exactly that – a myth – so is it a myth that revolutionary movements spring to life fully formed.

Confusion and set-backs are inevitable. But if these protests continue and deepen, they have the potential to reverse the period of sectarianism, racism and division in which the working class presently finds itself. We need to watch this situation closely and lend support in any way we can. 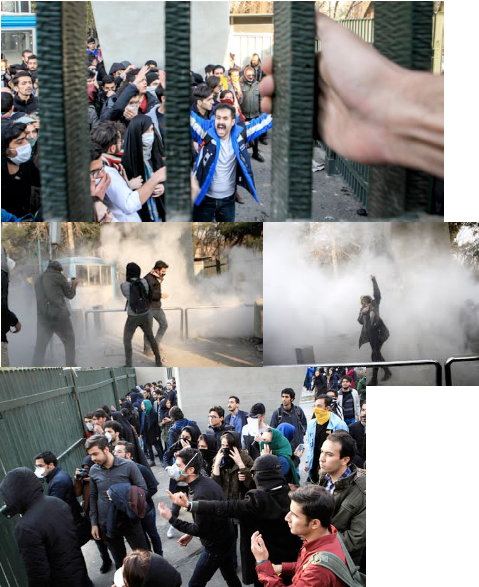 Ongoing protests in Iran
Is this a turning point?